The eruption caused tidal waves, which virtually wiped out the advanced Minoan civilization of Crete 70 miles to the south. Some scholars believe that the island is part of the legendary lost continent of Atlantis, which supposedly slipped underwater during the disaster. What remains today of Santorini is a large croissant-shaped island enclosing a vast bay, the largest caldera on earth (7X14 Miles). There are also four much smaller islands called Thirassia, Nea Kameni, Palia Kameni and Aspronissi.

The first inhabitants of Santorini, the Pelasgians, named it Kallisti (the most beautiful). Since the island was inhabited for at least two centuries, due to the eruption of the Volcano, the Spartans came and lived on it, under the regime of King Thiras, who gave the official name of the island of today, which is Thira. Nowadays, we refer to it by the name given in honor of the islands patron saint, St. Irene of Thessaloniki, who died here while in exile in 304 AD.

Santorini, which covers 132 square kilometers and is located 127 nautical miles from the port of Piraeus, has an important wine production; there is hardly any vegetation apart from vines. The rich volcanic soil also produces popular small sweet tomatoes. The island also exports pumice stone, china clay and pistachio nuts. Two million tons of volcanic soil is exported every year for use in the cement industry. A member of the Cyclades group of Aegean islands, Santorini has a permanent population of approximately 10.500. Santorini has 13 villages.

Fira, is the islands capital. It is situated 275 meters above the sea and may be reached from the port of Skala climbing the steep, 566 broad steps. This should only be attempted by the untiring while the traditional way up the zigzag path is by renting pack mules or donkeys. For those who prefer modern conveniences, a funicular lift is available.

The traditional settlement of Oia is located on the northern tip of the island, high on the cliff-top. The architecture of Oia, is typical Santorinian with houses sunk into the volcanic soil, whitewashed walls and bleu domes...

Oia in 1900 had close to 9.000 inhabitants with virtually all of them mariners and whose’ descendants today live in Piraeus. They owned 164 seafaring vessels and seven shipyards. In the area there were 79 churches.

After the devastating 1956 earthquake and the passing of 80 years, 1980 presented just 500 permanent residents, 75% of whom are mariners and who have 112 seafaring vessels. In 1951 Captain Antonis Dakoronias established a Maritime Museum.

In the village of Pyrgos you can witness the remains of one more Venetian castle. The 1956 earthquake has heavily damaged most of them.

On the island there are more than 250 churches, from tiny ones to quite large and elegant ones, with something in common: they are clean and whitewashed.

Aghios stefanos, on the summit of Mesa Vouno (Middle Mountain), is the oldest one, and it was built on the traces of a basilica dedicated to St. Michael the Archangel between the fourth and fifth century.

In the village of Mesa Gonia, is located the church of Panaghia Episcopi. The 1915 fire destroyed a great number of its treasures such as liturgical and ecclesiastical books, priests vestments and holy vessels. Only icons had come out safe from the catastrophe. It is said that a hand covered them and protected them from being burnt. The church was built in 1115.

At the southern end of Santorini is the ancient excavation site of Acrotiri. Much of the credit for the finds at Acrotiri went to Dr. Spyridon Marinatos, a well-known Greek archeologist. His work began in the early 1930s and lasted until the day he was killed during an accident at the site in 1974. However work did not stop there and continues even today.

The volcanic material that burnt the island, is today its fertile soil and the shroud that covers and preserves the unique wall paintings, which were brought to light during the excavations. The frescoes of Thira have an extremely large variety of subjects; the artists have chosen them with care so as to cover rituals and social needs. Many of them can be found among other finds at the Archeological Museum or at the Prehistoric Museum in Fira. 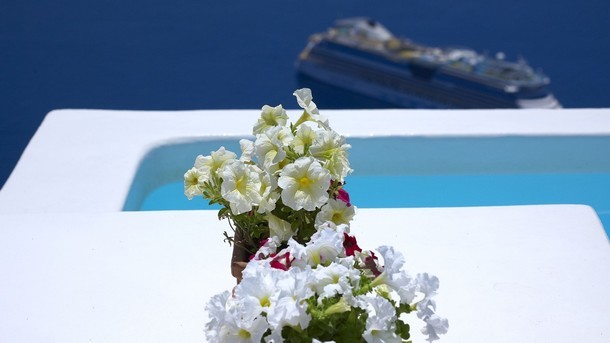 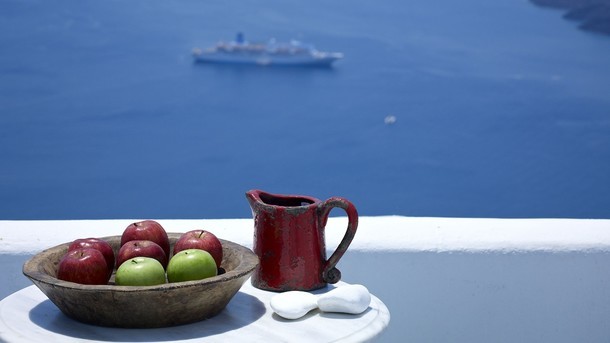